An Oasis in the Food Desert

In 2010, the University of Louisville published a study called “The State of Food: A Snapshot of Food Access in Louisville” that examined inequities in the food system in our communities. The study was authored by the Food in Neighborhoods (FiN) committee, a group of nonprofit organizations, public health advocates, local government officials, farmers and concerned citizens. Formed under the Mayor’s Healthy Hometown Movement (MHHM), the FiN committee began as a convergence between the Food Security Task Force and the MHHM’s Family and Communities Committee. The full report can be found here, and it reinforces the need for one of our most beloved programs – Seed to Table. 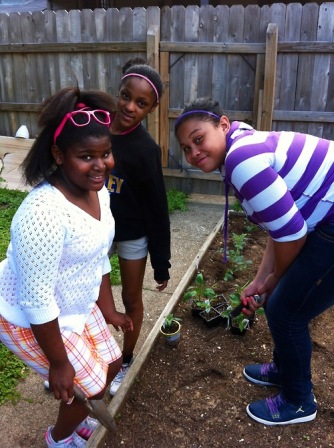 The report shows that West Louisville is a “food desert” with inadequate access to grocery stores selling fresh food. West Louisville and East Downtown are under served by supermarkets, but convenience stores and fast food restaurants abound in these areas and offer foods with low nutritional value to residents. Many of the people in these communities rely on public transportation and do not have convenient means to travel to obtain their groceries. Lack of access to healthy food creates health problems in many cases, but local chef Kathy Cary came up with one solution that has benefited Cabbage Patch children and families for years. The Seed to Table program teaches children how to create their own urban gardens and use the food they grow in a variety of recipes. 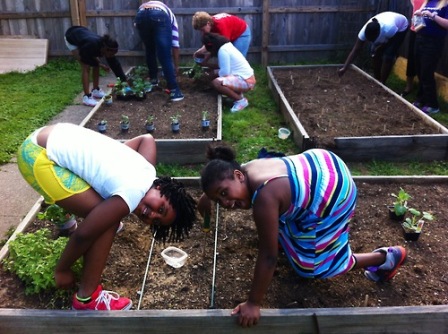 The Patch has three garden plots in our backyard. We grow corn, watermelon, beans, peppers, tomatoes, cucumbers, cabbage, herbs and sometimes eggplant. While we usually have a core group of 8 to 10 gardeners, as many as 25 to 30 kids will be involved in the garden each summer. A lot of children who said they wouldn’t eat tomatoes or corn find themselves coming back for seconds! We find that when children cultivate their own vegetables, the ownership and control they have over the process gets them excited about eating fresh and healthy! This year we are especially blessed to have received a grant from the Norton Foundation that will help continue the Seed to Table legacy. Our 2014 garden was planted at the end of May, and we look forward to a summer full of delicious lessons.