For years, The Cabbage Patch staff members noticed a trend among our members; as they became teenagers, they come to The Patch less frequently, even if they had been enthusiastic participants for years! Some of this disengagement could be attributed to the teens needing to get part time jobs to help their families financially, and so we added a Teen Employment Program to help keep members engaged. Other teens simply felt like they “aged out” of some of the programs. In order to combat some of the restlessness from our older members, several staff members have created more programs that are solely teen focused. A new ‘teen space’ has been developed that enables the teenagers to have a sense of ownership in the building. In this space they are able to complete their homework, play games, and build fellowship among each other. In addition, Teen Club is now held once a week, where members are engaged in age–appropriate discussions and topics, and are able to share a safe and fun place among their peers. 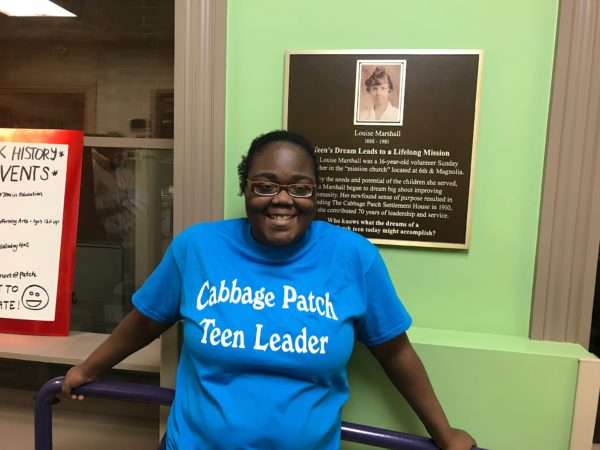 Staff members helped the Teen Club organize a potluck dinner on the Wednesday before Thanksgiving.  Each teen brought a dish from home or cooked something in the kitchen with Mr. Tyrone. The meal consisted of turkey, several sides, and a plethora of desserts.  The meal was so successful that the teens, after eating, were able to share the leftovers with the staff and clients still in the building. The teens then thoroughly cleaned the kitchen and Holladay Hall before leaving for the holiday.  Several teens even postponed joining other programs until their cleaning tasks were completed.  The potluck was a resounding success and the teens showed excellent responsibility in bringing a food dish and cleaning up after themselves. The Cabbage Patch’s teen-focused activities build teamwork, purpose and resourcefulness, values that will serve our members well as they enter the College Scholars Program and prepare for their careers. Thank you for helping to build pathways to success for our older Patch members!